Rear Defogger no longer works, press the button, relay clicks, but doesn't stay on. Fuses on that circuit are good. I understand this is a common problem with the HVAC control unit which is now a unobtanium part. Picked up a used one and it too has the same fault. Tested on the bench and the relay clicks and never stays energized, nor does the indicator illuminate and no power to the rear defog output pin on the module. Seems there is a timer chip on the rear defog module which controls the "on" time for the defog grid and that is the component that failed. Thought about bypassing the timer, but would have to keep holding the defog button to keep it on. I believe the timer is the 5977 chip in the attachment and that too is unobtanium. Any ideas for a workaround.

The LM555 timer IC is not only an 8-pin DIP like that, but I think it is the most produced IC of all time and vast number of designs needing timers are based on it or "pin compatible" variants. Post a picture of the other side of the PCB and I can probably reverse-engineer the board to see if a 555 is likely to work. The 555 is probably under $1 in cost, so you would not be risking much by giving it a try.
J

Years ago I had an astro that had a broken wire in the harness at the rear hatch, the rubber cover looked good but when pulled back there it was a clean break in the wire. If memory serves it is at the top right side and the harness does a twist as it goes from body to hatch. Good luck

Bill, Here's a picture of the PCB. I do see a lot of 555 chips, but they seem like RTC timers. The defog timer is probably a decrement counter that counts down to zero from a pre-determined value, I'm guessing 10 min. since that draws a lot of current. With the proliferation of electronic modules it today's cars, tomorrows classics will require a electrical engineer to keep them running as those BCMs and PCMs become unobtanium after 25 years or so.
I did suspect that rear harness in the hatch, but the indicator doesn't illuminate and testing on the bench there is no current at the output pin when the button is pressed.

I'll study it again tomorrow with fresh eyes, but it looks to me like the pin-out is not the same as a 555.
P

Billr, Thanks. I as well can't find that chip anywhere. Second thought was to bypass the timer on the board, would just have to hold the defog button to keep the relay energized. Don't want to wire in a switch as glass and/or circuit can overheat if left on too long.

Have you checked JYs for that module?

If you are really assiduous about fixing your module, the PCB could be modified to take a 555. Cuts and jumpers for the traces, good fun like that...

Looking at the posted PCA images, this one thing stood out to me. I would try reflowing the solder joint circled below. 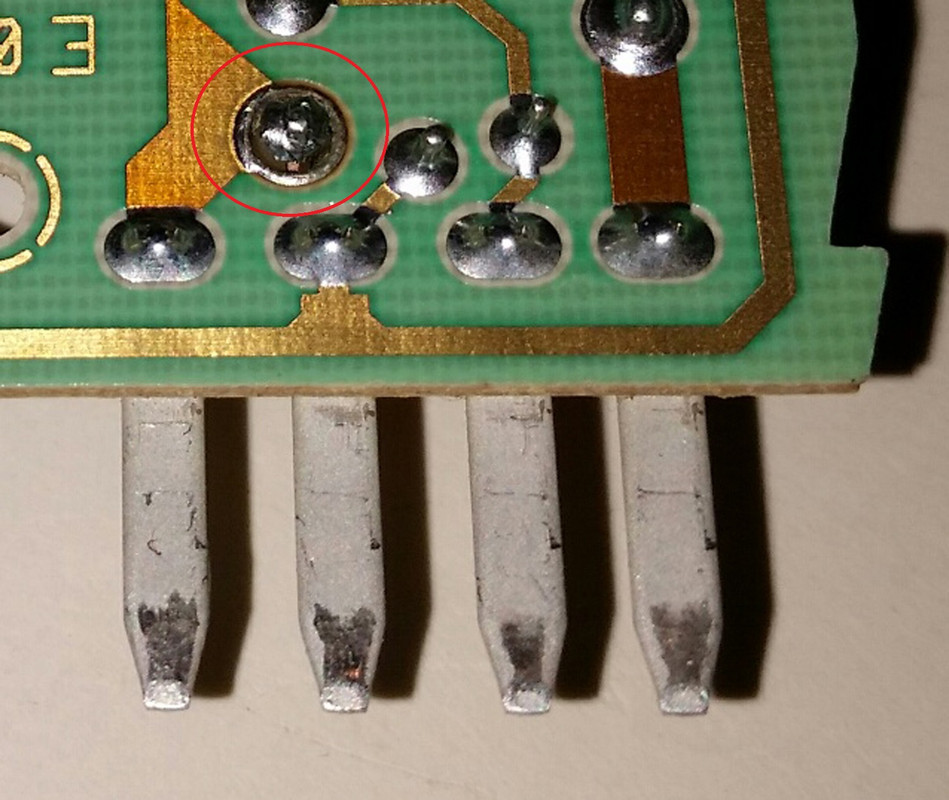 I've repaired the hard "BRAKE" and "ANTI-LOCK" failure in my 2003 Safari by opening up and reflowing similar looking (fractured solder joints) in the ABS controller PCA.

Edit: Looking a bit more closely, there's another one that could stand a reflow - the one that's cut-off in the upper right looks like a good candidate. Under magnification there is most likely a few more.
Last edited: Mar 21, 2021
G

Hit all of them. They may look fine and not be OK.

I use an Optivisor for solder point inspection. I agree, those solder joints look bad. The upper right one has the "circle of intermittent operation". The other one looks like the solder got hot enough to run away from the relay leg.

I added a jumper wire to a an older 1996 jeep DIC that kept having issues.
P

Hmmm, I hadn't thought about the solder points, just that the module is junk judging by others' complaints. I did source one from the online auction site and that one was inoperative as well, so I took a chance on another one and that one is apparently good. Thanks for the suggestions on the circuit board.
You must log in or register to reply here.
Share:
Facebook Twitter Reddit Pinterest Tumblr WhatsApp Email Link
Top