I wouldn't be sure until I cut the filters open and see how they're made. Fram are junk, cheaply made.
P

FWIW, avoid ACDelco filters with the "E" suffix (E = E-Core design). If the filter media happens to fail, the pieces will not be contained in the filter can. 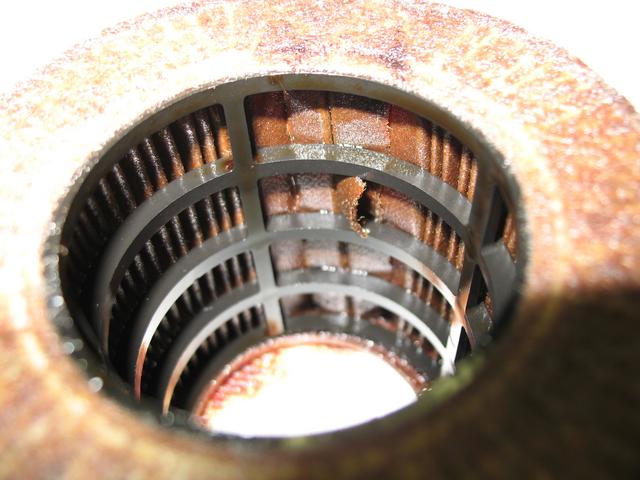 This filter came off of a V8 Toyota.

What isn't now days, same principle applies to maintenance. If you change the oil at sever intervals, you will never come close to having a oil filter fail, no matter how cheap. What makes a filter fail? , cheap as it may be, lack of inherent maintenance.
N

Still have that Chinese like finger puller to pull that rope seal over the top of the crankshaft, bottom had to be installed in the oil pan, didn't dare cut it, and it was good for about 5,000 miles then started to leak again.

Also much easier to read that dipstick when your oil was black, but that was about time you changed it. Was around 1961 that came out with that PCV valve that pulled fumes out of the crankcase in the combustion chamber. Before used as so-called breather pipe, just an opened ended pipe into the bottom of the engine block above the oil pan. When you took your foot in off the gas, creates a vacuum in the pan, and would suck up road dust like crazy.

Were better off to switch into neutral to keep the engine speed as low as possible or will be changing your engine oil every 500 miles.

Sucking up those fumes into the combustion chamber is not good either, carbons up your valves and sparkplug, better to put it in a tank and mail it to the EPA.

None of the vehicles until postwar WW II had oil filters came out in 1947, were in a canister of the paper type, where made of heavy steel with a drain plug. GM went back to this paper only filter somewhere around 2,000 and said they invented it, Screw ons were loading up land fills.
You must log in or register to reply here.
Share:
Facebook Twitter Reddit Pinterest Tumblr WhatsApp Email Link
Top