I own a 2014 Buick Encore with 53000 miles on it and randomly it will loss power, shakes and stutters when traveling at highway speeds.

As I follow the vehicle when it malfunctions it blows heavy black exhaust that smells like sulfur . Sometimes on start up it will blow white smoke that smells rich.

We originally took the vehicle in for a service bulletin stating that the PCV could develop cracks in it and cause the vehicle to mis perform. The dealer never addressed this item and went directly to the turbo.

Can anyone help diagnose this problem. All help is greatly appreciated. I will return the Buick tomorrow because after spending $1300 on the turbo and installation the problem still isn’t resolved and these guys don’t seem to know where to look.
B

Are any codes being set, is the dealer aware of the black smoke?

At this point, you are in an awkward situation. If it is a reputable dealer, they will get to the bottom of this for little-or-no additional cost. If they are not reputable, then it will little good to pass on advice from us; you would be better off taking it to another shop and shrugging off the $1300.

Although the black smoke is an indication of poorly burned fuel, that could be for many different reasons. Looking at live-data, while the car is underway and the problem is happening, is going to be a practical way to narrow this down. Did they take it for a "drive", either on the road or on a dyno, to see the problem as it occurred?
G

billr said:
Are any codes being set, is the dealer aware of the black smoke?

At this point, you are in an awkward situation. If it is a reputable dealer, they will get to the bottom of this for little-or-no additional cost. If they are not reputable, then it will little good to pass on advice from us; you would be better off taking it to another shop and shrugging off the $1300.

Although the black smoke is an indication of poorly burned fuel, that could be for many different reasons. Looking at live-data, while the car is underway and the problem is happening, is going to be a practical way to narrow this down. Did they take it for a "drive", either on the road or on a dyno, to see the problem as it occurred?
Click to expand...

No codes have been set. They took the car over the weekend and drove it to look for the problem. I’m not sure if they viewed live data and highly doubt that they put it on a dyno. I really can’t afford to simply shrug off $1300. That’s a lot of cash in this economy.
G

And they were aware of the various smoke scenarios.
B

Can you afford to waste more cash/time if they are not a good shop? Take it back and see what they propose. If you decide to make this a DIY project we can help, but I don't feel there is any advice we can provide that will compensate for a bad shop, and a good shop won't need any help from us at all.

Sorry if this isn't the kind of help you desire, but it is honestly my best effort.
G

All vehicles are the same and different, had turbos go bad, major loss of power, those fins in the air intake side are not turning restricting air flow intake. Shake rattle and roll is more of a misfire problem assuming you are not driving on a washboard.

Use to be a EGR problem but no more, has variable valve timing that leaves burnt fuel when the exhaust valve closestearly, could be a bad VVT solenoid.

New turbo for this car is less than 500 bucks, and not that difficult to change. Kids dealer wants 400 buck to replace his T&C spark plugs, about a 45 minute job, we are going to do that today for 24 bucks.

I will probably get grief for this, but will attempt to attack it anyway. Since I am on overtime pay, I have time.

First off, I do not want to get attacked, quite the contrary. SO bear with me if you wish, or just ignore.

My understanding of how a turbo works, is at high way cruising speeds, no more boost unless you floor it, so in essence, this engine if it is wonky as you say it is, not the turbo that is the problem. Proof is what I read here, two turbos later, still not up to par, I have to side with bill.,

If you can, can you post some stuff, such as how did the dealer or shop come to conclusion the first turbo was bad, but procceded to put in a third one and still no joy.Something is eluding the tech over there. And by giving us more information, we may help, That is after all the goal of the site.

Watching fuel trims at time of event will defiantly rule out turbo. Algorithm rules out when WOT. Misfire monitors shut off, ecu doesn't read data when in a case like this. SO, We need to see live data to properly asses this.

Beltching white smoke, normally coolant. Blue smoke normally oil. Any one of those that has crudded up a o2 or cat, that is exactxly what you get as a symptom such as you describe. This in my opinion, may have been at first a blown turbo, that spewed oil in the exhaust, o2 sensors couldn't read, sending ecu into a fail safe. Putting a second new turbo in there at this point was exactly that, pointless.

If any of that makes sense to you, plz post back.

the 1.4l is known for turbo problems, but not THAT much, mostly, it is the gdi system that sucks large in the gm cars of this buick. I work in this trade alot, and the most I see when loss of power, highway loss like that, and engine shaking, gdi system needs attention.

I would as a last ditch effort, do a gdi fuel system treatment and stop throwing turbos at it.

You would be real surprised what a thorough gdi treatment does to the data. You actually see it trim down.

but plz, can you post codes. cuz the way you describe this problem, that ecu for sure coded something. Just sayin.

Once you have ascertained that the cam driven gdi pump is good, cam lobe is not worn, look at the injection system for deposits. This is basically the same engine than in a cruze or other stuff gm put out.

Maintaining that system is primordial. Usually, every 40k klics. In usa that is a bit less, I left my calculator at my gf house.

Nickd here is a fan of seafoam. I actually like the stuff also. But the best I have found that really works wonders, CRC or the valvolene kit.

If you have time, this article probably says it better than my faulted french english 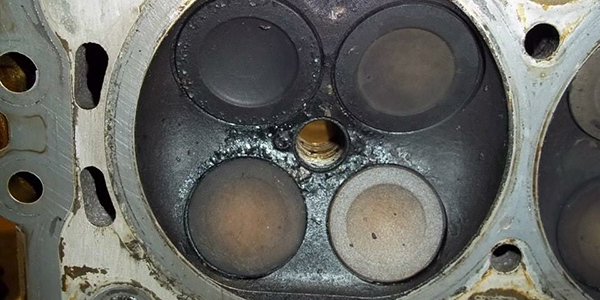 Gasoline Direct Injection or GDI has seen rapid adoption by the automotive industry over the last several years in lieu of multipoint fuel injection systems due to advantages in fuel efficiency and reduced emission levels.

It was an interesting article for me, but I think the OP has left us; disappointed that we didn't have a "magic bullet" to fix the woes and unwilling to provide the info we needed to start proper diagnosis.

As to the article itself, it generally all made sense to me and was consistent with what I know; although I could debate a few points. In particular, I am well-acquainted with that hard "lava rock" deposit; but it was also common back in the carb days. It is a problem with engines in general, not a "new" problem with GDI. I have had to chip that stuff off with a hammer and cold-chisel.

billr said:
I have had to chip that stuff off with a hammer and cold-chisel.
Click to expand...

Yeah, the good old days of detonation . However, with the new algorithms to correct fuel stagy, this is exactly the symptom you get.

I know this is off point and not thread specific, but when I was driving my 302 overboard slash over bored, the high octane pretty much took care of that, but was pulling heads alot and when sweet spot hit rev and torque, could hear beer case in engine, which in french we call 24 case party.

You were using mega squirt for your vette, I was using carb based ignition msd.

But the stoiciometrical ideal still to this day remains.

in the case of these tiny engines running full on suvs, the thing gets hot. And as a day in and day out tech, I cant stress enough how important the upkeep of the newer small cc engines with turbo is important
You must log in or register to reply here.
Share:
Facebook Twitter Reddit Pinterest Tumblr WhatsApp Email Link
Top